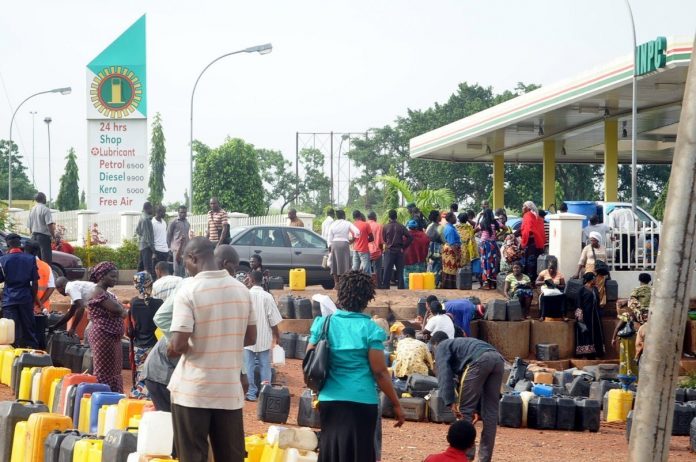 Minister of State for Petroleum Resources, Dr. Ibe Kachikwu, says the queues at filling stations is as a result of logistics challenges and has nothing to do with petrol scarcity.

Speaking with journalists on Monday in Lagos, Kachikwu urged the public to ignore rumours of planned upward review of pump price of petrol.

The minister spoke with newsmen at the opening of the second edition of the Annual International Conference and Exhibition of the Oil and Gas Trainers Association.

He said there was no discussion within government circle about petrol price review and wondered how the rumours became pervasive.

“I took time to go round some stations in Lagos and I discovered that the queues which resurfaced has disappeared and let me tell you the issue of petrol pricing is a sensitive thing.

“You can see how the oil unions quickly reacted to the rumour and again the government is sensitive and engages stakeholders in every decision or policy it makes.

“Therefore, this spontaneous reaction and resurfacing of queues, despite assurances by the Nigerian National Petroleum Corporation is worrisome,” Kachikwu said.

He expressed confidence in the management of the NNPC and its capabilities to maintain and meet the supply needs of the country, adding that the logistics gap which prompted the unnecessary panic had been resolved.

Saying that no system is perfect, Kachikwu said: “Sometimes you have some of these things happen but as a responsive and responsible government alternative arrangements are always in place such that any gap is taken care of not to allow the situation to escalate.”

Baru said that the vessels had discharge challenges, especially at Warri port, but the situation had been resolved.

He said that even with the challenges, the NNPC has about 1 billion liters of petrol which is equivalent of above 28 days supply, assuring that the nation will not experience scarcity of any sort.

Earlier in his goodwill message, Kachikwu had challenged industry operators and stakeholders to take the issue of Human Capital Development very seriously as Nigeria currently lags behind in developing local capacity in the oil and gas industry.

The minister expressed concern that the country had spent so much time dealing with issues around the sector but without tangible success stories to tell.

“I want to ask, how can we start building Floating Production Storage and Offloading develop modules to transfer to the sub-region.

“When shall we allow market philosophy to drive the market with government providing enabling environment through adequate policies.

“When shall we begin to install our pipelines, build power plants, build our own refineries using in-country resources and attract private sector funding of projects and save government scarce resources,” the minister asked.

In his address, a former Head of State and Chairman of the occasion, Gen. Yakubu Gowon, commended OGTAN for making Human Capital Development as a driver for national transformation which is the focus of the conference proceedings.

Gowon urged government to pursue policies and programmes that will help to catalyze the development of a globally competitive human capital base for Nigeria, one that is steeped in innovation and critical 21st century skills.

“I know your industry is driven by breakthrough innovations in science and technology, such as the ones that brought about the shale revolution, which today, has impacted the industry and world economies.

“So, while we must build human capacities in science and technology, engineering and mathematical (STEM), skills,
let me also counsel that some of the efforts and resources are devoted to developing the leadership and the entrepreneurial competencies that compliment the later.

“This is the only way we can ensure the growth of indigenous enterprises to sustain domestic value capture in the country,” he said.

We have identified terrorism financiers in Nigeria – Malami