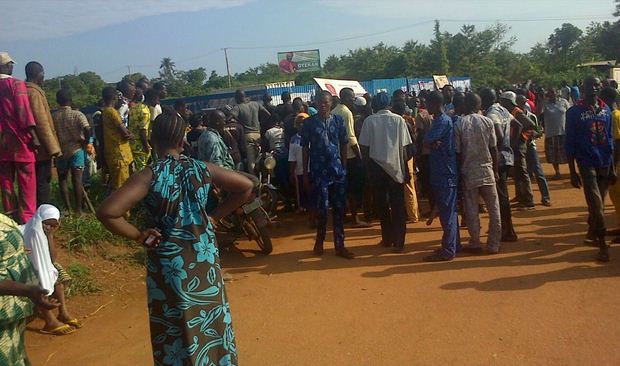 The Ogun State Police Command has declared a police inspector missing 24 hours after hoodlums set ablaze the campaign office of the Deputy Speaker of the state House of Assembly, Olakunle Oluomo, and his five vehicles at Coker Bus Stop in Ifo Local Government Area of the state.

The Police Public Relations Officer in the state, Abimbola Oyeyemi, said the inspector was attacked with a machete when a mob swooped on security men after a stray bullet from one of them killed a man, simply identified as Akeem, on Sunday.

Oyeyemi told newsmen in Abeokuta on Monday shortly after the Commissioner of Police, Bashir Makama, led top officers of the command for an on-the-spot assessment of the scene of the mob attack.

He said the inspector’s whereabouts were unknown, adding that the development had confirmed that the policemen were attacked by the hoodlums in the area.

Riot broke out on Sunday at Ifo following the killing of Akeem by a stray bullet from a policeman at Coker Bus Stop.

The riot, however, led to arson as some people protesting the killing burnt down Oluomo’s campaign office and his five buses.

The PPRO, however, said no fewer than 25 suspects had been arrested in connection with the violence.

He said the CP was briefed on the magnitude and the causes of the incident which snowballed into the arson.

Narrating how the incident happened, Oyeyemi said a stray-bullet fired by one of the men of the Zonal Intervention Squad in the state killed Akeem.

He said Akeem was erroneously killed while the police were attempting to scare the mob which was advancing to attack them after arresting a notorious cultist in the area.

According to Oyeyemi, the officers had already arrested for gunrunning.

He said, “The suspect mentioned another person that was part of the notorious cult group which they all belong to. It was the suspect in our custody that was taken to Ifo to identify the suspect he mentioned. They successfully arrested him.

“But on their way back to the station, his colleagues attacked the officers and during the course of escaping from the attack, they released gunshots which mistakenly hit  one person and he died.”

Oyeyemi further explained that the officers involved were being detained at Ifo police area command on the orders of the CP.

He also disclosed that the corpse was removed by the police.

He, however, expressed shock that a few minutes after the incident, “some hoodlums went to the office of the deputy Speaker at Coker Bus -Stop and set it ablaze along with five buses.”

The PPRO described the act as criminal and vowed that the perpetrators would be made to face the law.

Oyeyemi said, “Some people mobilised and attacked the office of the deputy Speaker, burnt down the office and five vehicles in that area.

“The correlation between the incident that happened and the reaction of the people is what we cannot establish because there is no nexus between the two.

“For now, we have arrested 25 suspects. The issues are two; the case of murder and arson.

“But the case of arson is what the people have committed. That act is pure crime, there is nothing that warrants the spontaneous action.”

The spokesperson, however, said it would have been understandable if the protesters were the victim’s family members.

He said Makama had visited the family of the slain victim with a promise that the perpetrators would be brought to book.

He said normalcy had returned to the place.

I’ll give my best in service – Gambari