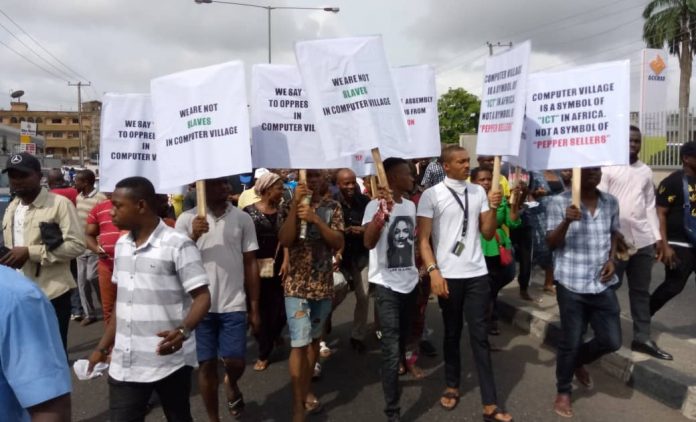 Traders in the Computer Village, Ikeja, Lagos State, on Tuesday shut down activities to protest the planned installation of female and male market leaders “Iyaoloja” and “Babaloja” respectively in the hub.

The traders told a correspondent of the News Agency of Nigeria covering the protest that the computer village was an international market that did not need such imposition of Iyaoloja.

Mr Wasiu Agbaje, an Information Communication Technology Engineer, said that hub was not like the regular markets where such should be imposed.

Agbaje said that installing such would undermine the hub because there was no relationship between technology and Iyaoloja.

“What do the Iyaoloja and Babaloja have to offer, what value are they going to add to the hub? And what technological innovations are they bringing?

“The computer village is not like any other street market where pepper and other things are sold.

“It is an international technology hub and it should be treated as such,” he said.

Also, a businessman who preferred anonymity told NAN that the computer village was an international market and should be treated as such.

According to him, it will undermine the position of computer village internationally as the biggest technological hub in West Africa.

He said installing such Iyaoloja and Babaloja would contradict what the hub was known for and breach the peace there because it was not a regular market.

A Software developer, Mr Joseph Efosa, said that such installation would disturb the 25 years of peaceful existence of the hub.

Efosa said that the computer village was not a regular market and such installation was not needed.

Jandor thanks Sanwo-Olu for gifting all Royal Fathers N20m each, says...

APC crisis: People who plan to distract us won’t succeed –...