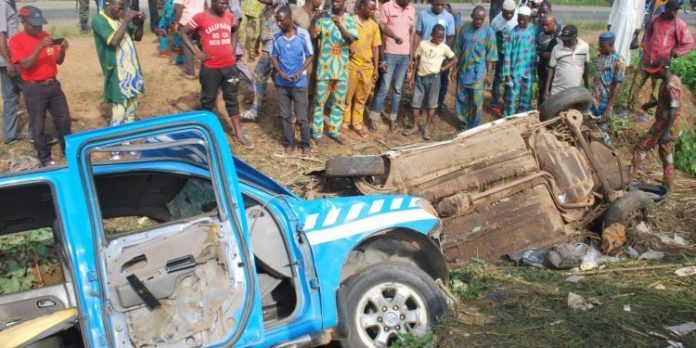 A total of 540 persons died, while 3, 383 others were injured in 950 road traffic crashes across the country in January, Federal Road Safety Corps (FRSC) has reported.

A total of 7, 827 persons were involved in those accidents.

The agency in its monthly Road Traffic Crash (RTC) Report signed by the Corps Marshal, Boboye Oyeyemi, and made available to News Agency of Nigeria (NAN) in Abuja, on Frida, said the figures indicated a decrease of 21 per cent in fatality.

“A comparative analysis of January crash statistics with that of the corresponding month in 2018 revealed a general increase across all parameters.”

According to the report, Lagos-Ibadan road recorded the highest number of road crashes with 57 cases representing 11 per cent decrease from Dec. 2018.

“Abuja-Lokoja and Kaduna-Abuja roads followed with 54 and 51 cases,” he said.

Analysis based on states revealed that Kaduna recorded the highest number of crashes with 95 cases.

“The Federal Capital Territory (FCT) followed with 83 cases, Ogun with 64 cases while Nasarawa and Oyo recorded 58 and 46 cases.”

On the other hand, he said, Kaduna recorded the highest number of fatality cases with 53 deaths representing 48 per cent decrease as compared to Dec. 2018.

“Bauchi and Ogun followed in order of magnitude with 44 deaths each while Kano and Oyo had 35 and 29 cases.

Furthermore, the report indicated that speed violation accounted for high causes of crashes with 502 cases representing 49.4 per cent of the total causative factors

“Commercial vehicles constituted 65.5 per cent of the total vehicles in crashes within the month under review.

The agency appealed to the Federal Government and private media houses to promote road use education with a view to stepping up road awareness among road users.

Varsity staff say no going back on planned industrial action