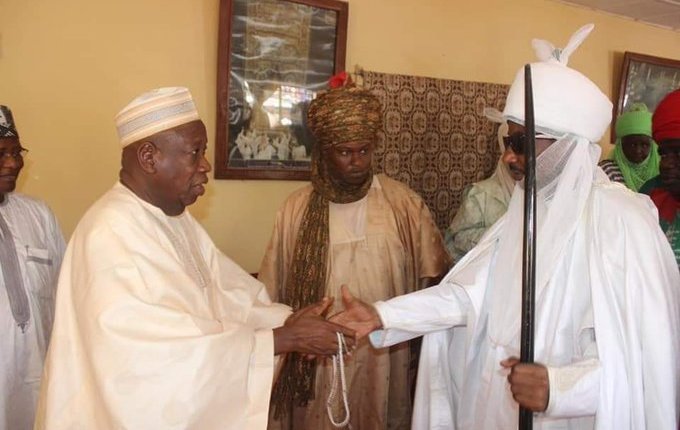 The Kano State High Court has granted an order restraining Governor Abdullahi Ganduje from implementing the breakup of Kano Emirate.

Mr Ganduje signed a law on Wednesday which created an additional four emirates, a move that was widely seen as depletion of Emir Lamido Sanusi’s influence.

The matter immediately took a political dimension with the Peoples Democratic Party members in the House saying that the additional four emirates were not properly created, accusing the All Progressives Congress majority of disregarding extant parliamentary procedures.

Two PDP House members, including the minority leader, said they received a court order against the new Emirates on Friday afternoon.

The lawmakers said the House was officially on recess and was not properly convened before the law was hurriedly passed on Wednesday.
Governor Ganduje had on Wednesday assented to the controversial bill approving the creation of the additional Emirates in the state — Gaya, Rano, Karaye, and Bichi.

The Kano State House of Assembly amended the Local Government and Chieftaincy Affairs Law of the state to create the four new Emirates.

The lawmakers’ move followed a petition submitted to the state assembly by one Ibrahim Salisu seeking the decentralisation of the Kano Emirate Council.

The petitioner demanded the upgrade of the traditional rulers of Karaye, Bichi, Rano, and Gaya to the status of first class emirs.

The assembly immediately set up a committee to look into the petition and come up with a report.

While reading the joint committees report before the floor of the house on Tuesday, the Majority Leader, Baffa Danagundi, said the report also recommended the review of the law.

He said the decision followed wide consultation with stakeholders.

Mr Danagundi said the response received showed that there was a need to upgrade the traditional rulers.

The amendment bill received a swift passage at the Assembly after scaling the third reading at Wednesday’s plenary presided over by Speaker Kabiru Rurum.

An excited Governor Ganduje hurriedly assented to the bill on Thursday.

The new law establishing the emirates tagged “Emir’s Appointment and Deposition Amendment bill 2019” was passed expeditiously (within two days) by the lawmakers raising concerns about a possible political undertone.

Observers said the real motive of the governor is to reduce the tremendous influence of the Emir of Kano.

Mr Sanusi reportedly opposed the re-election of Mr Ganduje. The governor scraped through re-election after a disputed supplementary election. He lost heavily in Kano Municipal, the seat of the Emir.

Kano is one of only two states in Nigeria with one emirate or traditional council. Sokoto, the seat of the Sultan of Sokoto, is the other state with a similar arrangement.

The Emirates, as with the other traditional councils, have roles in the administration of local governments and are allocated five per cent of the revenues of the local councils.

Kano State has the highest number of LGAs in Nigeria — 44.