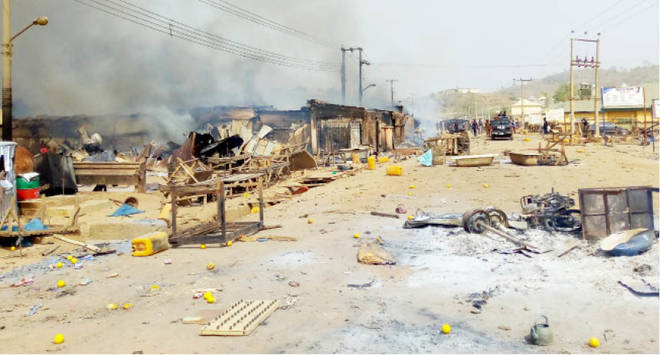 No fewer than five persons have been reported killed in fresh attacks by suspected Tiv militias on Jukun villages in Taraba State.

The attacks Friday morning occurred in Rafinkada and Kente in Wukari in the southern part of the state, local officials said.

The development came barely two weeks after the deputy governors of Taraba and Benue states met in Wukari after which they issued a communiqué that the crisis between the two groups had been resolved.

Confirming the attacks to our correspondent, the Caretaker Chairman of Wukari LGA, Daniel Adi, said about 11 persons were still missing.

He said the attackers also burnt down many houses in Rafinkada and Kente.

‘’Rafinkada and Kente were on fire this morning and five people are suspected to have been killed by the Tiv militias. The casualty figures may rise.

‘’All these people are coming from Benue State and is like the Benue State government is fighting Wukari Local Government in particular.”

Mr Adi urged the federal government to intervene and warn Benue people to stop trespassing into “our lands and fighting us in Wukari.’’

He noted that with this attack, no fewer than 40 people were allegedly killed by Tiv ethnic militias in the recent weeks.

“With today’s attack, over 40 people were killed in the recent time by these Tiv militias based on figures available.

‘’Enough is enough! We will defend ourselves now because we have been pushed to the wall.’’

A Jukun youth leader in the area, Zando Hoku, also spoke to Premium Times on phone on the incident.

“In the early hours of today, the Tiv people in large numbers, working on their numerical strength, besieged our two communities of Rafinkada and Kente.We had earlier repelled their attack but they came back this morning.

“We have been defending for quite a long time, they have been coming to attack our villages and the government has not done anything to stop the conflict,” he said.

When contacted, a Tiv spokesperson in the state, Orbee Uchiv, said he had no knowledge of the attacks.

“But you know they (Jukuns) have been recently attacking our villages in Wukari areas. More than 20 people were killed in different attacks.The whole of my village, Ikyaior, was burnt by Jukuns. My ultra-modern school with 50 computers, well-equipped science laboratory, library, an administrative block, blocks of classrooms, etc were looted and others totally razed down, recently.

“As I said earlier, let me confirm on today’s fight because I am not aware of it,’’ Mr Uchiv said.

The police spokesperson in the state, David Misal, also said he had no information on the attacks.

“I am hearing that for the first time from you. I have to wait for my officers to report to me,’’ he said in a text message.

June 12 Annulment: I did the right thing in Nigeria’s interest...

FASHOLA CHARGES NIGERIANS ON PROTECTION OF INFRASTRUCTURE AS MINISTRY RESOLVES 3...