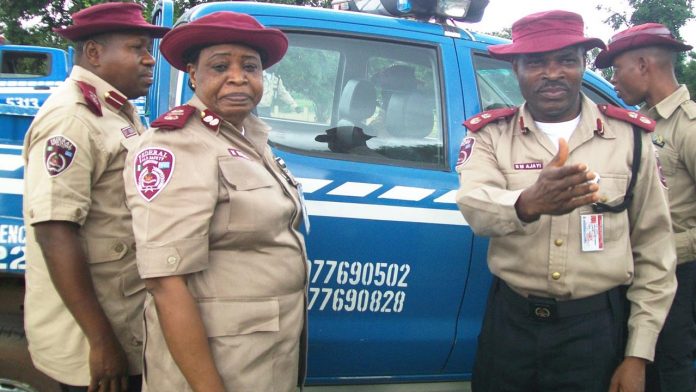 The FRSC officials, identified as Bayegunmi and Abioye, were kidnapped in Iwaraja, Oriade Local Government Area of Osun State, on Monday.

Ms Odoro said efforts are on to rescue the victims.

“The officers belong to Akure unit. The wives also confirmed and they said the kidnappers are asking for ransom,” Mr Kazeem had said.

Mr Kazeem later provided more details of the kidnap in a short message.

“The police highway commander suspected incident of Kidnapping since they were just invited to the scene few minutes after the attack. The bush around the scene was combed by the police team but (they) could not trace the victims. As at the time of reporting, police could not ascertain the number of passengers in the vehicle.

“The DSS Osun & Ondo including police are working together to ensure rescue.

The spokesman said the kidnappers are demanding N1 million ransom.

“Just now, the two spouses called sector commander to inform that the kidnappers are requesting for N1M and to be paid by 0900 hrs this morning,” he wrote.

Kidnapping for ransom is rampant across Nigeria including in Osun State.

A professor at Obafemi Awolowo University, Ile-Ife, was recently released by kidnappers after ransom was reportedly paid.

Three people were also kidnapped on Sunday in neighbouring Ekiti State. The kidnappers are demanding over N20 million as ransom.

COURT ORDERS SARAKI, OTHERS TO BE REMANDED IN PRISON