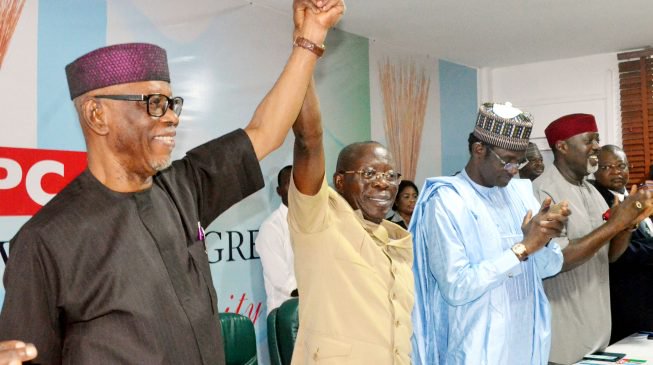 According to him, Oshiomhole lacks the temperament and capacity to run a political party.

Odigie-Oyegun stated this in his response to a communique issued by the South-South APC State Chairmen, who blamed him for allegedly being the cause of conflicts within the party.

The Deputy National Chairman (North), Lawal Shuaibu, had in a May 28 letter, asked Oshiomhole to resign for allegedly running the APC like a private fiefdom.

He had alleged that many decisions attributed to the National Working Committee were personal decisions of the national chairman but imposed on the party without formal meeting.

But in defence of Oshiomhole, the six state chairmen who asked Shuaibu to apologise to the national chairman within seven days, blamed Odigie-Oyegun for the troubles in the party.

They claimed that it was the problems created by Odigie-Oyegun, that fuelled the unfortunate situation.

However, in a statement by his Public Affairs Adviser, Ray Morphy, in Abuja on Sunday, Odigie-Oyegun said the claims of the state chairmen were “ludicrous and infantile.”

He described the statement as an attempt to justify the failings of the party under Oshiomhole.

“He engages his mouth before engaging his mind, so he offends party members. So, how does that constitute traps by Oyegun, the erstwhile chairman?”

Odigie-Oyegun said Shuaibu in his letter had confirmed that Oshiomhole was running the party without recourse to the NWC.

He added, “He acts in direct opposite of decisions taken by NWC. No minutes of NWC meetings which, in any event, take place outside the party secretariat.

“How would you not have crises in states with the confusion that Oshiomhole created when he gave the states freedom to choose their methods of choosing candidates for elections?

“Much of the crisis in states arose out of sheer incapacity on the part of the current chairman. How does this Oshiomhole’s incapacity become traps by Oyegun?”

Giving reasons for the crisis in the party, Odigie-Oyegun said many party men were disappointed because of the unfairness and injustice meted to them during the primaries.

“Only a bad carpenter quarrels with his tools. Indeed Oshiomhole is degrading and demarketing the party. Rather than seek to bring more people on board, he is chasing people out of the party with his agbero style of engagement,” he added.

But reacting, the Akwa Ibom State APC Chairman, Ini Okopido, said the six South-South APC state chairmen issued the communique stating their position on the matter in order to save the party from disintegration.

He said, “Anybody that loves the party should be interested in strengthening it. Anybody who wants the success of the party and the government should believe in building a solid foundation.

“It is under that atmosphere that the party can bring dividends of democracy to Nigerians.”

PDP BROKE INTO THE TREASURY, EMPTIED IT – OSHIOMHOLE