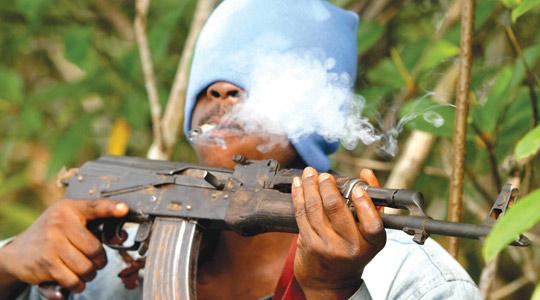 The police in Ondo State have given details of how suspected herdsmen in a kidnap attempt, shot and killed Funke Olakunrin, the second daughter of Afenifere leader, Reuben Fasoranti.

“Mrs Funke Olakunrin, based on accounts of all eyewitnesses, was killed by Fulani herdsmen who emerged from the bush, shot her and killed her in the process,” Afenifere’s spokesperson Yinka Odumakin had told Premium Times on Friday evening.

Mr Odumakin said Mrs Olakunrin was travelling from Akure to Ore when her vehicle was attacked alongside others.

Mr Joseph, who confirmed the attack and the death of Mrs Olakunrin, however, said he was not aware the deceased was related to the Afenifere Chairman.

“It happened at a spot between Kajola and Ore, where some hoodlums numbering about 15, attacked two vehicles, 1 Toyota Land Cruiser and 1 Camry,” Mr Joseph said on Friday night.

“The Land Cruiser was carrying five passengers, including the deceased, which we later identified as one Funke Olakunrin.

“They shot the woman, we rushed her to the hospital, but we lost her.

“Other four occupants that were abducted, we have rescued them.

“Inside the Camry too, we had three occupants, they were also abducted, but we have rescued them. We have rescued a total of seven persons taken during the attack.

“There is still one person left that we are still looking for, and we are working frantically to ensure that the hoodlums are brought to justice and ensure any other hostage were rescued,” he said.

The police spokesman said he would not confirm if the attackers were Fulani herdsmen, noting that until an arrest was made, it would be difficult to identify the persons and where they came from.

“No, you can’t shave the head of a man in his absence,” Mr Joseph said. “You have to wait for us to arrest them. Somebody you have not arrested, it is difficult for you to establish his ethnicity.”

He said crime does not have colour, ethnicity or religion, adding that “crime is a crime and a criminal is a criminal.”

Afenifere is at the forefront of the campaign against the building of cattle settlement for herdsmen earlier promoted by the federal government.

The group had earlier raised the alarm over the rising wave of violent activities of herdsmen in the south west region, calling on the governors and security agencies to rise up to the situation to save the nation from an impending armed conflict.

The governors of the south west had also responded to an alarm by summoning a security summit where they had resolved to tackle the problems of herdsmen and kidnapping.

We will not give in on this occasion, Onyeama reveals Nigeria’s...