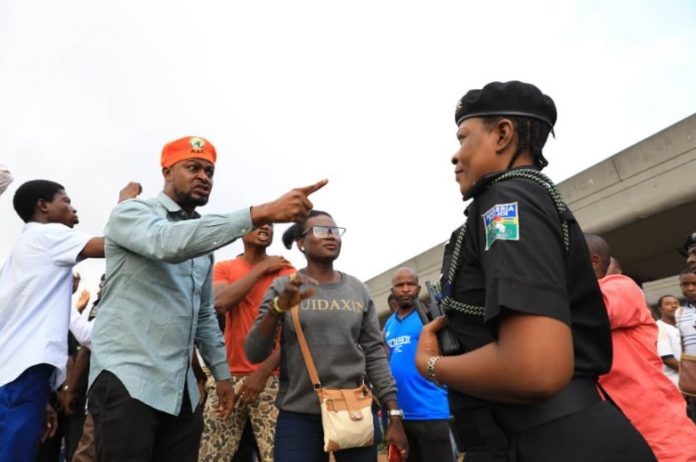 An unarmed protester has been shot by one of the many police officers deployed by the Nigerian government to curb Revolution Now demonstrations ongoing in several states across the country.

Heavily-armed soldiers were also among the security personnel deployed to the National Stadium, Surulere where the Lagos version of the protest is holding.

Armed officers were also seen chasing protesters from in bids to disperse demonstrators some of whom were also barred from speaking to the press.

“We have a standing order from the Inspector General of Police Mohammed Adamu to disperse the crowd,” an unnamed police officer reportedly told the media.

“Not even the Lagos police commissioner can stop us,” he reportedly said.

Recall that Revolution Now convener and African Action Congress (AAC) presidential aspirant Omoyele Sowore was arrested by the secret service (DSS) in the early hours of Saturday as part of apparent moves to truncate the August 5 demonstrations.

The DSS said Sowore’s call for a revolution was treasonous.

But organisers, while calling for the unconditional release of Sowore, said the protests would go on in his absence.

Protesters who showed up at the National Stadium in Lagos met heavy police and army presence.

Critics have described President Muhammadu Buhari as a hypocrite after his government accused Revolution Now demonstrators of treason.

In 2011, Buhari, who was running for office under Congress for Progressive Change (CPC), commended the demonstrators who overthrew the democratically elected government of Hosni Mubarak. He also urged Nigerians to learn from the Egyptian revolutionaries.

“The Egyptian pro-democracy campaigners defied all odds to achieve their set goal of terminating the 30-year old grip on power by Mubarak,” Buhari said through spokesperson Yinka Odumakin who now opposed him.

“Their tenacity has again confirmed the truism that no force on earth can stop a people determined.

“The military in Egypt showed exemplary conduct with the way they refused to be used to attack the forces of change.

“They showed the whole world that there is a clear difference between the state and those who temporarily occupy political offices for a fixed tenure.

“This is a lesson for our security agents who have been used to subvert the will of the people at elections in recent past,” Buhari said.