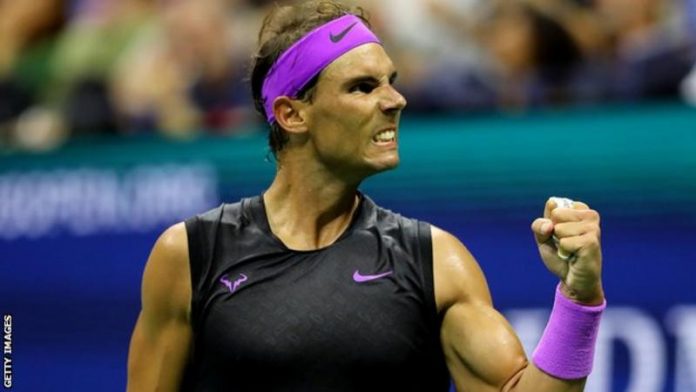 Rafael Nadal remains the favourite to win the US Open – and move within one of Roger Federer’s tally of 20 Grand Slams – after a hard-fought quarter-final win over Diego Schwartzman. Spanish second seed Nadal won 6-4 7-5 6-2 against the Argentine 20th seed. But he was made to work as Schwartzman twice rallied from four-game deficits in a stuffy Arthur Ashe stadium.

Nadal, 33, will next play Italy’s 24th seed Matteo Berrettini, who beat Gael Monfils in their last-eight match. Three of the men’s semi-finalists – Berrettini, Grigor Dimitrov and Daniil Medvedev – have never played in a Grand Slam final. “To see myself in the situation to lose both breaks in a row was tough, but I’m super happy with the way I accepted the challenge,” Nadal said.

“Here I am, semi-finals, it means everything to me. “Physically I’m fine. Today was a heavy day, big humidity, and I sweat a lot. I had some big moments at the end of the second set and beginning of the third, but the last few games I felt good again.”

Of his opponent in the semi-finals, Nadal added: “I saw him play. He has big serves, big forehands, and is super confident. He makes big steps forward every week so it will be a big challenge but now is the moment to keep going.”

FRSC Board approves promotion of 2,341 officers