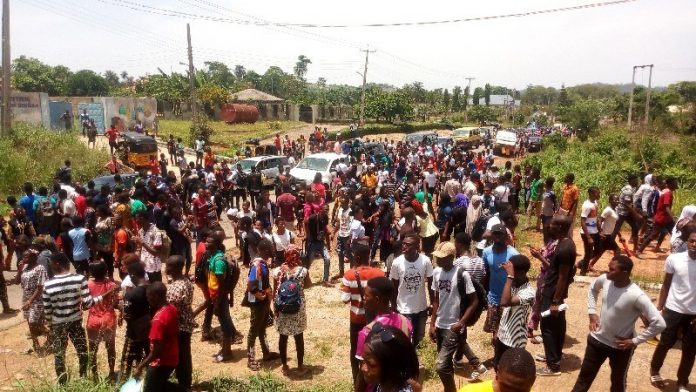 Protesting students from the Federal University Oye Ekiti (FUOYE), on Tuesday, took their grievances to the venue where the state governor’s wife, Bisi Fayemi was holding an empowerment program with women and attacked with dangerous objects. The students had earlier in the day, led by their Student Union Government, embarked on a protest against the total blackout in both campuses.

An attempt by security personnel attached to the governor’s wife to disperse the protesting students with tear gas and gunshots did not immediately yield result. While exiting the venue the students still launched another attack on the vehicles in the convoy.  Meanwhile, Police Public Relations Officer, DSP Caleb Ikechukwu, confirmed the incident in a statement.

According to the police spokesman, the protesting student took to the Federal Highway away from the perimeter wall of University and Blocked the Oye-Ikole-Lokoja Federal Roads. He added that the protesting students also invaded the office of Benin Electricity Distribution Company (BEDC) in Oye Ekiti, and it took the quick intervention of policemen deployed to the scene to prevent further damage of the office complex.

No N60bn was printed to shore up March allocation, NEC affirms