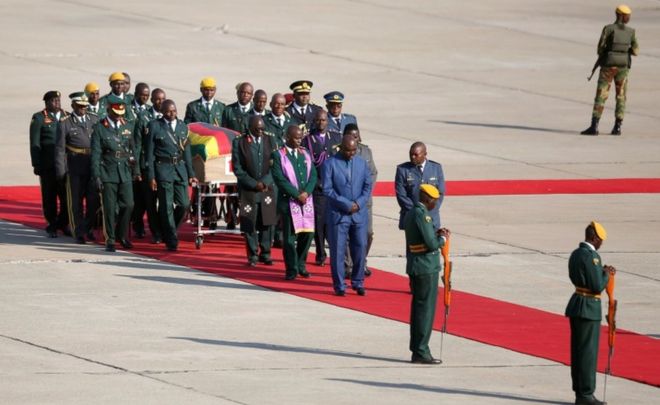 The body of Robert Mugabe has arrived back in Zimbabwe after a private flight from Singapore, where he died last week aged 95. Mr Mugabe was Zimbabwe’s first leader after the country became independent in 1980. He held on to power for almost four decades before being ousted in a coup in 2017.

He will be buried on Sunday after a state funeral on Saturday. However, his final resting place remains in doubt. The specially chartered flight carrying Mr Mugabe’s body landed at about 13:30 GMT. He had been receiving hospital treatment in Singapore.

A convoy of vehicles with “RG Mugabe” number plates was seen next to the runway and a crowd of people, some wearing the former president’s image on T-shirts, awaited the arrival of the plane. Mr Mugabe’s wife Grace was also on the flight, the ex-president’s nephew, Leo Mugabe, said.

The body will be taken to the family home known as the “Blue Roof” in Harare.

Police rescue five students, 19 others abducted by bandits in Zamfara