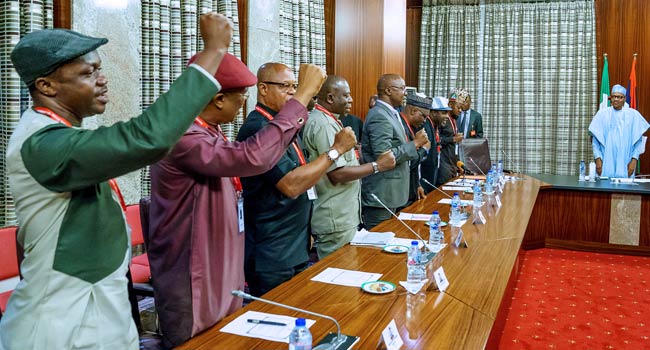 President Muhammadu Buhari says he has no intention of inflicting additional hardship on Nigerians. He declared that there are no plans to increase fuel price and also restated his promise of ridding the nation of corruption and the oil and gas sector of corruption.

The President said this when he met with newly elected officers of the Trade Union Congress (TUC) in his office, in Abuja. The TUC delegation was led by the National President, Quadri Olaleye. President Buhari disclosed this when he responded to a request by the group not to increase the price of fuel and promised to sustain the momentum in his second tenure and lift millions of Nigerians out of poverty.

He added that the key agenda of the inaugural Federal executive council meeting focused on the medium-term expenditure framework which includes the minimum wage as he re-echoed a commitment to implement the new national minimum wage.

Nigeria lost $50bn in 10 years due to uncertainty over Petroleum...

President Buhari commissions bridge where he was almost killed in 2014...