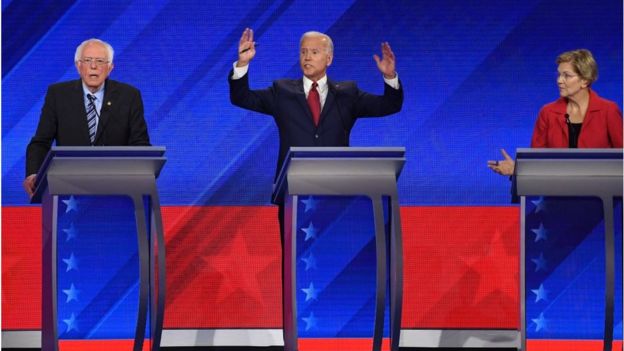 Three frontrunners in the race to become Democratic Party candidate for US president have clashed over healthcare at the party’s third debate. The debate in Houston, Texas, was the first time Joe Biden, Elizabeth Warren and Bernie Sanders faced off on stage.

Former Texas lawmaker Beto O’Rourke drew some of the biggest applause with an impassioned plea for gun control. The winner is likely to face President Donald Trump, the Republican Party favourite, in the November 2020 poll. Only the 10 highest-polling Democrats were eligible to take part in Thursday’s debate.

Vice-president under Barack Obama, Mr Biden is leading current polls by a considerable margin with Massachusetts Senator Ms Warren and Vermont Senator Mr Sanders in second and third. The rest of the field are polling in single figures.