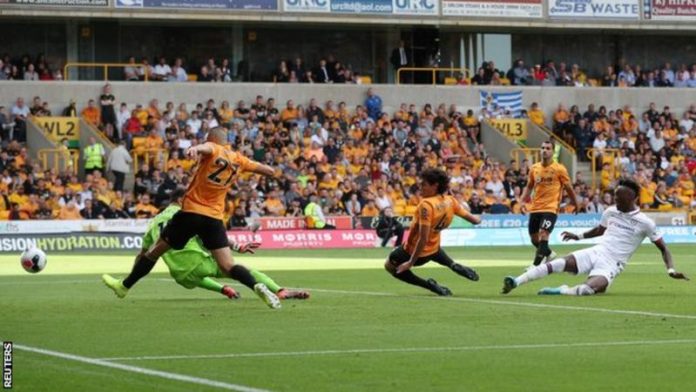 Tammy Abraham scored a brilliant hat-trick – and an own goal – as Chelsea destroyed Wolves at Molineux. The England forward scored twice in the space of seven first-half minutes after Fikayo Tomori – another 21-year-old – had opened the scoring with a stunning 25-yard finish.

Abraham, who spent last season on loan in the Championship with Aston Villa, doubled the lead with a shot on the turn after referee Graham Scott had played an advantage following Conor Coady’s foul on Mason Mount. Wolves, who remain without a top-flight win this season, fell further behind when Abraham headed home, before the Chelsea striker made it 4-0 with a superb finish after beating Coady – a seventh league goal of the season that took him to the top of the scoring charts.

In an eventful game, Abraham then scored an own goal as Romain Saiss’ header struck his right hand before crossing the line, before Patrick Cutrone added a second Wolves goal from close range. Mason Mount, 20, added Chelsea’s fifth goal with virtually the last kick of the game.