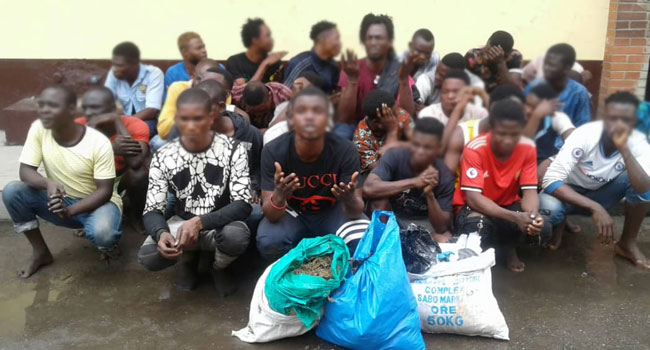 43 persons have been arrested in connection with some illegal activities in the Ikeja area of Lagos. Head, Public Affairs Unit of the Lagos State Task Force, Adebayo Taofiq confirmed this in a statement on Sunday.

According to the statement, the arrest was made after operatives of the Lagos State Environmental and Special Offences Unit (Taskforce) raided all streets within Central Business District including surroundings of the Afrika Shrine, Alausa, Ikeja, over the weekend.

Chairman of the Agency, CSP Olayinka Egbeyemi was also quoted to have said that the enforcement operations became imperative following complaints from members of the public about the activities of miscreants constituting a nuisance, as well as illegal street traders around the Shrine.

“The night enforcement operation was carried out on all roads around Afrika Shrine where hard drugs like Tramadol, Codeine, Skunk, Weed, Illegal Mixed Liquor, Assorted Food and all sorts of consumable and non-consumable items are freely sold on the streets in defiance of security agencies and government authority,” he said.