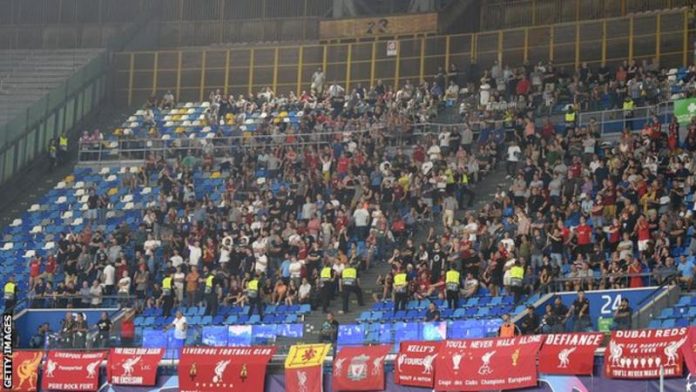 Liverpool chief executive Peter Moore has stayed in hospital with a fan who was “ambushed” in a bar in Naples before the Reds’ Champions League loss to Napoli on Tuesday. The fan collapsed at half-time due to “significant blood loss” according to a post on social media.

Merseyside Police say two Liverpool fans were reportedly assaulted at a bar before the match at 18:00 local time. They were attacked by a group on scooters and suffered cuts and grazes. The two men from the UK, aged 26 and 46, were treated at the scene before attending the game.

Moore had responded to a tweet asking for supporters to visit the injured fan, who has now been discharged from hospital. “I’m at the hospital with him right now,” Moore tweeted just before 01:00. “We will not leave him until we are comfortable that he’s fine.”

He later added: “The hospital staff and the police have now helped Steven and have been very co-operative. He’s been seen and will be monitored throughout the night. He asked me to thank everyone for their concern.”

Strike may be called off on Saturday, Doctors say after meeting...

LASU to get hostels for first time in 36 years