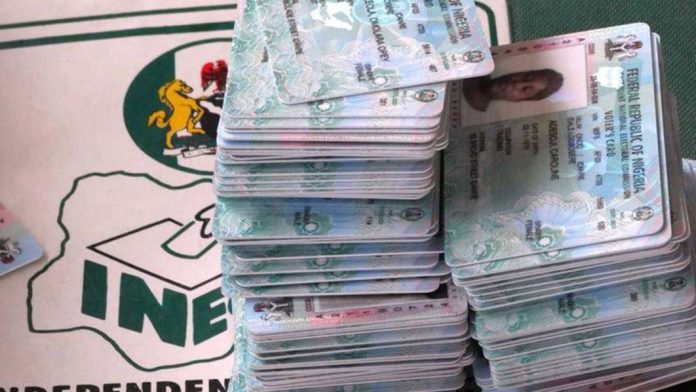 The Independent National Electoral Commission has said that 165,631 Permanent Voter Cards are yet to be collected in Kogi State and 40,912 in Bayelsa State, as of September 13. The commission disclosed on Thursday in a progress report on PVC collection, which it started on September 2, ahead of  November 16 governorship elections in the two states.

The infographic report titled “Consolidated PVCs collection as of September 13”, made available to the News Agency of Nigeria revealed that so far 5,269 PVCs were collected in Kogi within the first two weeks out of the 170,900 uncollected cards in the state. The report, which was broken down by Local Government Areas in each state, also revealed that in Bayelsa 6,581 cards have been collected so far within two weeks of the exercise. There were 47,493 uncollected PVCs as of September 2.

It showed that in Bayelsa 2,045 cards were collected within the first week and 4,536 in the second week, while in Kogi 2,276 and 2,993 cards were collected in the first and second weeks respectively. The collection of PVCs will continue till September 30 in the two states. The Chief Press Secretary to INEC Chairman, Mr Rotimi Oyekanmi urged registered voters in the two states yet to collect their PVCs to do so.

“We appeal to all eligible voters in Bayelsa and Kogi who have not collected their PVCs to do so before the deadline,” he said.

BREAKING: Inflation rate drops to 11.02% in August despite border closure...