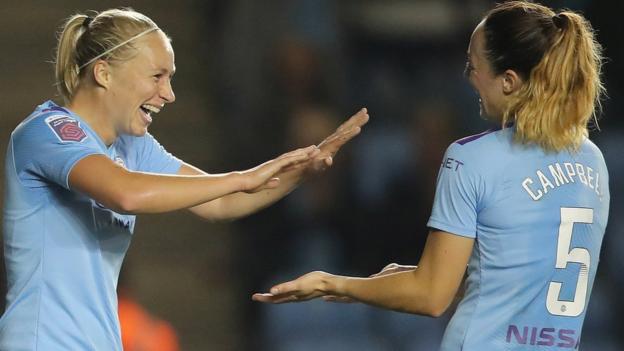 Manchester City will come up against their former striker Toni Duggan after being drawn against Atletico Madrid in the Women’s Champions League last 16. The England forward spent almost four years with City before joining Barcelona in 2017 and moved to fellow Spanish club Atletico in July. Nick Cushing’s team lost to Atletico in the last 32 of the 2018-19 competition.

Women’s Super League champions Arsenal will play Slavia Prague, while Glasgow City will face Brondby. The first legs will be played on 16-17 October, with the second legs scheduled for 30-31 October. This season’s final will be held in Austria’s capital Vienna on 24 May. Manchester City were seeded for the draw, based on their European results in recent seasons, whereas Glasgow City and 2007 winners Arsenal were unseeded.

French side Lyon, who have won the competition in each of the past four seasons, have been drawn against Danish side Fortuna Hjorring.

The last-16 draw in full