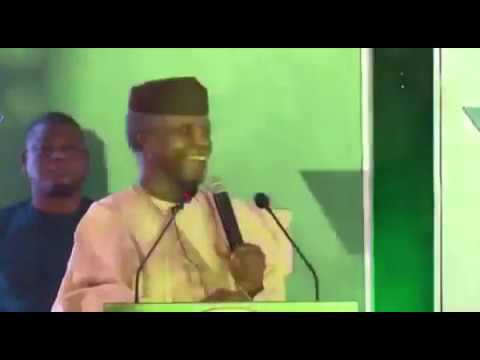 Vice President Yemi Osinbajo during October 1, 2019, Independence Day Dinner held at the old Banquet Hall of the State House, Abuja took out time to laud Nigerian dance styles and music. Professor Osinbajo in his address made reference to the popular Zanku dance noting that the dance is widely accepted not only in Nigeria but also outside the country.

According to the Vice President, ‘nobody dances like us.’ “From Skelewu to Sekem to Shakiti Boko to Shaku Shaku and the most recent Zanku, I’m sure you all know how to gbese. Gbe body e. “All over the world, everybody is gbese-ing now. “Nobody dances like us. It doesn’t matter whether you are the distinguished Senator representing Kogi West or the distinguished Senator representing Osun West,” he said.

Osinbajo appraised Nigerian culture and language which has travelled across the border and warmed its way into the heart of many. “Here is the video of a kindergarten class in China, the Children are learning Igbo. Very soon, everyone is going to be speaking Igbo,” Osinbajo said, showing a video of Chinese children in their classroom learning the Igbo language.