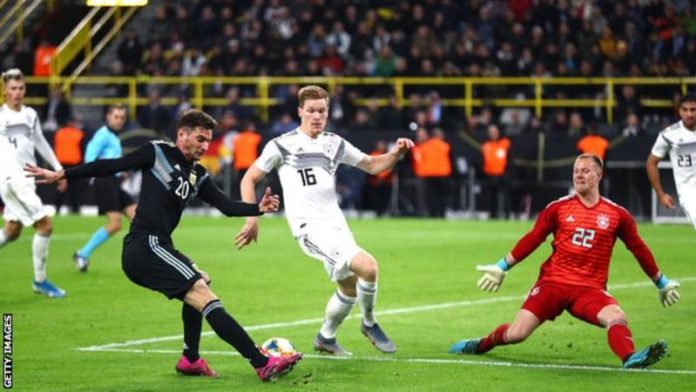 Argentina came back from two goals down to draw 2-2 with Germany in a friendly in Dortmund. In a repeat of the 2014 World Cup final, the hosts raced into an early lead when Serge Gnabry poked home in the 15th minute before Kai Havertz side-footed in seven minutes later.

But Argentina fought back after the break as substitute Lucas Alario’s header halved the deficit. Debutant Lucas Ocampos secured the draw with a deflected strike late on. It was an impressive fightback by Argentina in a game that was ultimately turned on its head by Lionel Scaloni’s substitutions, with Ocampos coming on at half-time and Alario just after the hour mark.

It had been all Germany in a first half where Argentina failed to manage a single shot on target and when Gnabry grabbed his 10th goal in 11 international appearances, it looked like the hosts would go on to record a big win.

However, they took their foot off the pedal after the break, allowing Argentina to get back into the game.