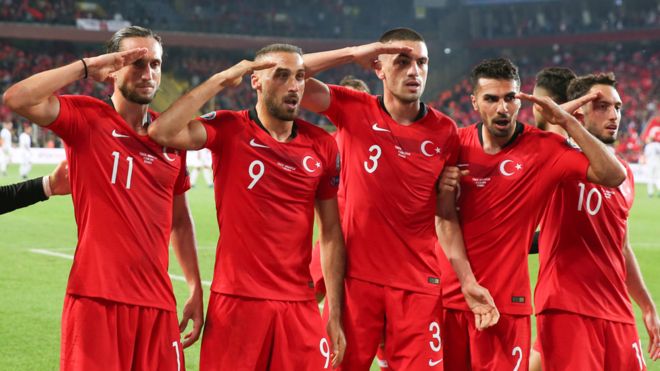 Europe’s football governing body Uefa says it will investigate a military salute given by Turkey footballers after Everton star Cenk Tosun scored a goal against Albania. Turkey’s 1-0 win in Istanbul came on Friday, amid Turkish army clashes with Kurdish fighters in northern Syria.

Tosun posted the salute photo on Instagram, with the message: “For our nation, especially for the ones who are risking their lives for our nation.” Uefa does not allow political gestures. The win keeps Turkey at the top of its group in the Euro 2020 qualifying matches.

On Wednesday Turkey launched a major offensive in areas controlled by the Kurdish-led Syrian Democratic Forces (SDF). Dozens of civilians and fighters have been killed on both sides.

Joe Biden: I think George Floyd will change the world