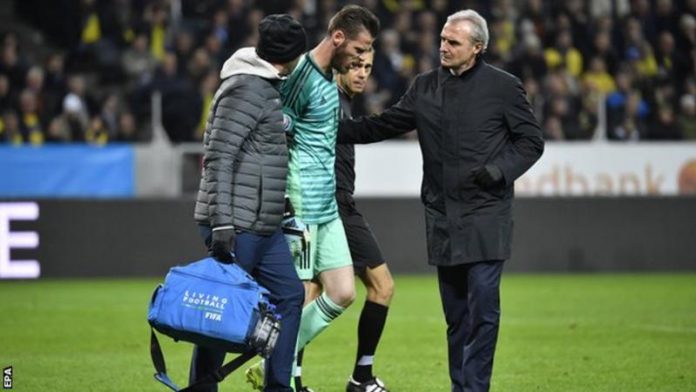 Goalkeeper David de Gea is a doubt for Manchester United’s Premier League game against Liverpool on Sunday after coming off injured on Spain duty. The 28-year-old appeared to hurt his hamstring during his country’s Euro 2020 qualifier in Sweden.

He was replaced by Chelsea’s Kepa Arrizabalaga after an hour in Stockholm with his side trailing 1-0. An injury-time Rodrigo equaliser earned a 1-1 draw and secured Spain’s spot at the Euros. De Gea’s injury came in innocuous circumstances – he immediately grabbed the back of his leg after clearing a backpass from his own player. He sat on the ground in his six-yard box before making his way off the pitch alongside the physios.

United are 12th in the Premier League and have not won in their past three top-flight games. They will face a Liverpool side aiming for an 18th consecutive Premier League win, a total that would equal the record held by Manchester City.