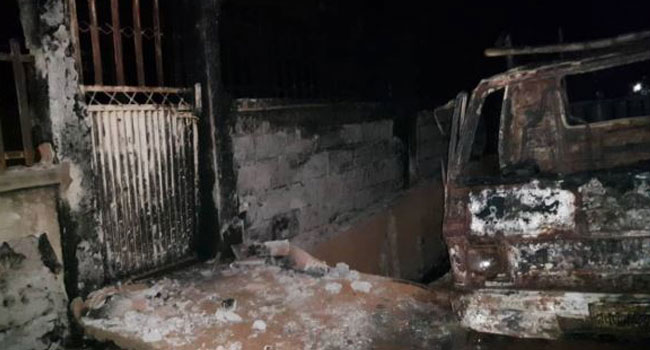 Barely 48 hours after a petrol tanker exploded at Upper Iweka, Onitsha another tanker explosion has occurred along the Enugu/Onitsha Expressway near Omagba, Anambra State. The fuel-laden tanker according to eyewitnesses fell at Bessoy Filling Station Bus Stop around 3:00 am spilling its contents. The contents then flowed through an underground tunnel into Heritage Street, Omagba where it eventually exploded.

Properties including earthmoving machines, two residential buildings, and several business outlets were gutted by the fire. Vehicles numbering about 15 were destroyed in the fire. Before the intervention of emergency service operatives from Anambra State Fire Service, residents trooped out en-masse and lent support to quench the fire.

Presently, no death has been recorded but residents decry the huge losses caused by the fire accident. Meanwhile, another petrol tanker has also lost control and fallen along Agulu road this morning creating panic among residents in the area.

Diri commiserates with IGP over death of police officers in Bayelsa

Govt has threatened to close Afrika Shrine over political meeting –...