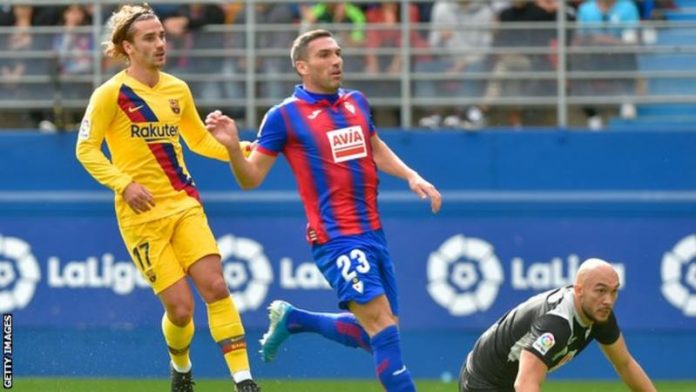 Barcelona moved to the summit of La Liga as goals from Antoine Griezmann, Lionel Messi and Luis Suarez earned them victory at Eibar. They were on their way to a fifth successive win in all competitions in the 13th minute when Griezmann fired low past goalkeeper Marko Dmitrovic.

Suarez had an effort ruled out for offside after the break before Argentine Messi slotted in the second. Messi then provided a square ball to Suarez who tapped in the third. It was a unselfish gesture from the 32-year-old forward having forsaken an almost certain 17th league goal in 10 games against these opponents.

The champions’ second-half dominance was in great contrast to the opening period when they repeatedly failed to stop Eibar getting behind them on the wings.

However, the only occasion Marc-Andre ter Stegen’s goal was threatened was when Pedro Leon swept a 15-yard shot over the bar.