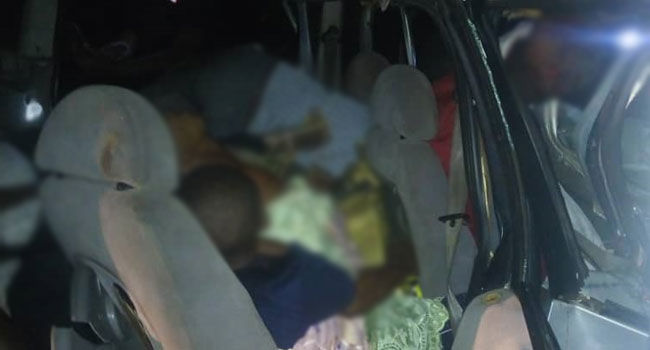 Five persons have lost their lives while two others were injured in an early morning road accident that occurred along the Ondo/Ore expressway. The fatal accident which took place at Awoyaya junction on Sunday involved a private Sharon Volkswagen car with registration number KTU 706 BW said to be travelling from Onitsha to Ile-Ife; and a trailer which ran away.

According to the sector commander of the Federal Road Safety Corps in Ondo State, Rotimi Adeleye, who disclosed to Channels Television that out of the eight occupants in the vehicle, five died. He added that two others sustained injuries, while a little boy escaped unhurt. Adeleye revealed that the accident must have been caused by over-speeding and poor visibility.

The FRSC boss appealed to drivers to always exercise caution and avoid over-speeding, adding that people should avoid the night journey. He informed that the remains of the dead have been deposited at the morgue, while those who sustained injuries have been taken to the general hospital, also in Ondo for treatment.

Meanwhile, the vehicle has been recovered by the police and taken to the Enuwa division in Ondo.