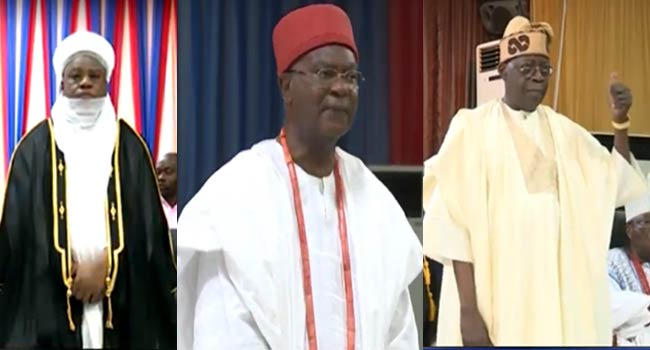 Afe Babalola University (ABUAD) on Monday conferred honourary degrees on top individuals including the Sultan of Sokoto, Muhammadu Sa’ad Abubakar; the Obi of Onitsha Alfred Nnaemeka Achebe; and the national leader of the All Progressives Congress (APC), Bola Tinubu.

The dignitaries were honoured during the seventh convocation ceremony of the institution in Ado-Ekiti, Ekiti State capital. Sultan of Sokoto and Obi of Onitsha were decorated as Doctor of Letters while Tinubu was decorated as Doctor of Public Administration. During the reading of his citation, the Sultan of Sokoto is described as a serial honourary awardee who has received honourary degrees in over 10 universities. He is also the current chancellor of the University of Ibadan.

Tinubu was honoured by the institution for his political acumen and for being a true believer in federalism. The honourary awardees were subsequently inducted into the alumni association of ABUAD.