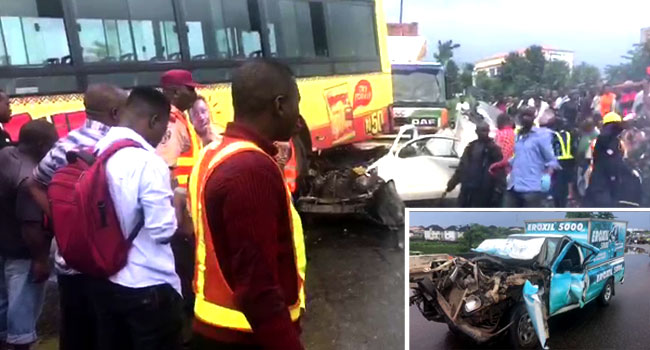 At least two persons are feared killed in a multiple-car crash on the Otedola Bridge section of the Lagos-Ibadan Expressway in the south-west region of the country. The accident, which occurred on Wednesday morning, is said to involve a containerised truck and several cars.

It was gathered that the incident involved a high-capacity bus on the bridge inwards Berger while motorists on the other side of the road slowed down to observe what has happened. This has caused heavy traffic on the road, a situation that has also left travellers on the section of the highway stranded. However, details of the accident remain sketchy.

The Lagos State Traffic Management (LASTMA) confirmed the incident in a series of tweets. It also advised motorists to take alternative routes to their various destinations as emergency officials rescue the victims and clear the road.

June 12 Annulment: I did the right thing in Nigeria’s interest...

Brexit: New era for UK as it completes separation from European...

No N60bn was printed to shore up March allocation, NEC affirms