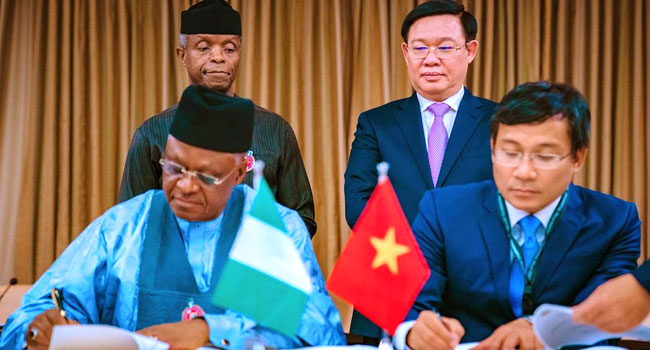 Nigeria and Vietnam have signed agreement on waiver of visa requirements for holders of valid diplomatic and official passports in both countries. The Vice President, Professor Yemi Osinbajo, and the Deputy Prime Minister of the Socialist Republic of Vietnam, Mr Vuong Dinh Hue, witnessed the signing and exchange of Memorandum of Understanding during a meeting on Wednesday at the Presidential Villa in Abuja.

Minister of State for Foreign Affairs, Ambassador Zubairu Dada, signed on behalf of Nigeria while his counterpart, the Vietnamese Vice Minister of Foreign Affairs, Mr Nguyen Minh Vu, signed on behalf of his government. Both countries also agreed on the establishment of a joint commission on trade and strengthening bilateral ties, as well as to increase cooperation in the areas of agriculture, tourism, defence and security, among others. They also agreed to explore other areas that would further strengthen existing platforms in order to boost economic ties between the two countries.

Professor Osinbajo, who received the Vietnamese delegation, noted that Nigeria and Vietnam established diplomatic relations in 1976. He added that the impressive development strides recorded by Vietnam over the years have been a source of encouragement to Nigeria. “We’ve been very keen watchers of your development, especially in the areas of agriculture, trade, services, industry, and I must say the impressive growth of Vietnam has always been a source of encouragement here for us in Nigeria,” the Vice President was quoted as saying in a statement by his spokesperson, Mr Laolu Akande.