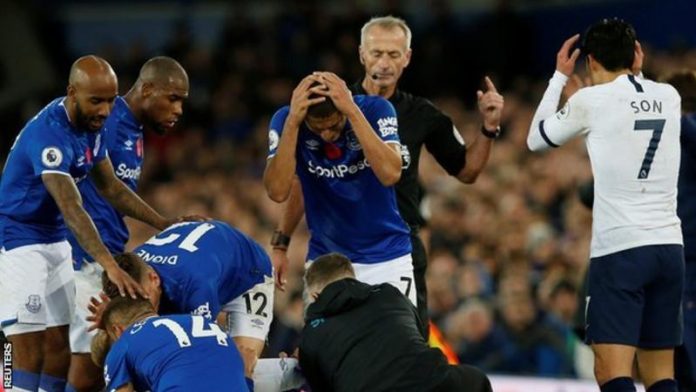 Everton striker Cenk Tosun says he would rather not have scored the 97th-minute equaliser against Tottenham if it meant Andre Gomes had not suffered his horrific ankle injury. Gomes suffered a fractured dislocation to his right ankle and will have surgery on Monday.

A distressed Son Heung-min of Spurs was sent off in the 79th minute for his tackle on the Portuguese midfielder. Tosun said Everton players “nearly cried” in the dressing room after. “You win, you draw, you lose but all that doesn’t matter when something like this happens,” Tosun wrote on Instagram.

“I wish I didn’t score, I wish we lost 0-5 and this didn’t happen. I know you will come back stronger bro and we will be there for you.” There was a six-minute stoppage as medics attended to Gomes.

The incident initially looked innocuous, but the mood immediately changed among the players and crowd as the full extent of the injury became apparent.