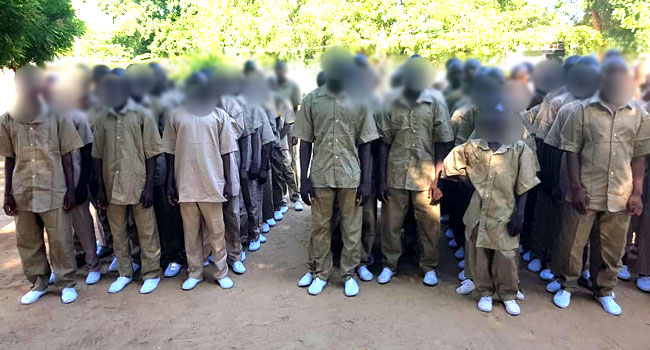 The Operation Safe Corridor (OPSC) has handed over 86 Boko Haram child fighters who voluntarily surrendered to troops of Operation Lafiya Dole to the Borno State Rehabilitation Centre in Bulumkutu. The Acting Director of Defence Information, Colonel Onyema Nwachukwu, disclosed this in a statement on Thursday.

He explained that this was in an effort to ensure that minors and other repentant Boko Haram fighters in the North East were given the necessary support and opportunity to embrace peace through the auspices of OPSC. “Following the handover, the repentant child fighters would undergo comprehensive Child Care Programme sponsored and organised by United Nations International Children’s Emergency Fund (UNICEF) in conjunction with Borno State Ministry of Women Affairs and Social Development,” he said.

According to Nwachukwu, the handover ceremony was witnessed by the Borno State Commissioner for Women Affairs and Social Development, Zuwaira Gambo, and a UNICEF official, Mr Clement Adams, among others.

Gambo and Adams congratulated the repentant children for laying down their arms and urged them to take advantage of the Deradicalisation, Rehabilitation and Reintegration (DRR) programme to turn a new leaf and abandon the senseless struggle.

How to check NECO 2020 results