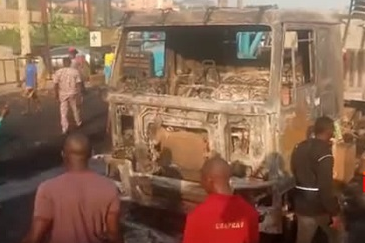 Two people have been confirmed dead after a petrol tanker exploded at the old toll gate end of the Lagos-Abeokuta Expressway, around Sango, Ogun State. It was learnt that the fire started around 12.05 a.m.

The spokesperson for the state fire service, Muinat Adeleke-Ashimi, who spoke for the acting Director, Margaret Adeseye, said two bodies were found around 4.00 a.m.

She said, “The petrol tanker skidded off the road, which resulted in the fire. Our men arrived at the scene at 12.14 a.m. “The fire was extinguished around 4.00 a.m. when two casualties were found — a male and a female.

“We are presently damping the fire.”