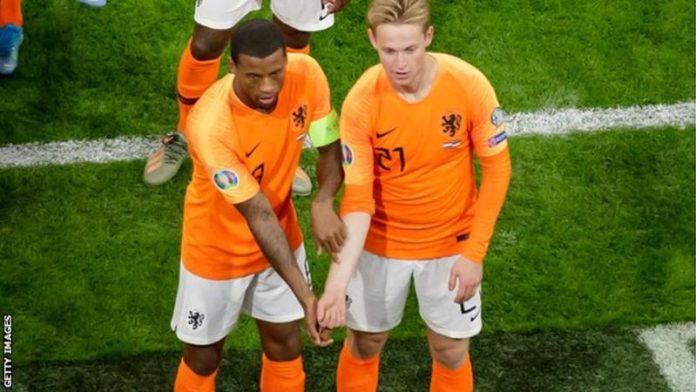 Netherlands manager Ronald Koeman says Georginio Wijnaldum spoke to his team-mates about racism before the gesture he made in the 5-0 win over Estonia. Wijnaldum and team-mate Frenkie de Jong pointed to the colour of their skin after the Liverpool star scored the first of his three goals.

It follows the alleged racial abuse of Excelsior’s Ahmad Mendes Moreira by Den Bosch fans in the Dutch second tier. “Gini just said something about it in the dressing room,” Koeman said. “He said he feels so happy with this Dutch team, where this problem [of racism] does not occur. It is one team and it’s nice to see.”

Earlier this week, midfielder Wijnaldum said the incident involving Mendes Moreira “really hit me on a personal level”. “I never expected anything like this to happen in the Netherlands,” he told the Liverpool Echo.

“I’m really shocked. It did happen, unfortunately, and the way people have talked about the incident really hurt me. It’s a problem in society and a problem that should be solved by our politicians.”

Roads Management and Development: PPP model a panacea to paucity of...