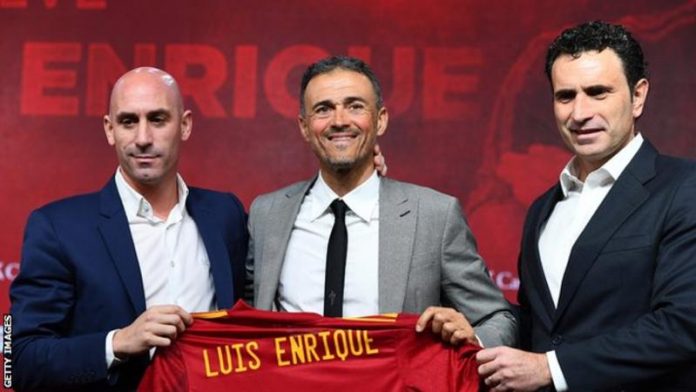 Spain’s returning manager Luis Enrique says his predecessor Robert Moreno was “disloyal” and will not be part of his coaching team. Enrique resigned from the role in June to spend more time with his nine-year-old daughter Xana, who died from bone cancer in August.

Moreno succeeded him but told Enrique he wanted to be in charge at Euro 2020 before returning to assistant manager. Moreno left the role after Spain’s 5-0 win over Romania on 18 November. “The only person responsible for Robert Moreno not being in my coaching staff is me,” Enrique said.

“He came to see me in my house and told me he wanted to lead the team at Euro 2020 and afterwards he would be happy to be my assistant coach again. “I understand that he has worked very hard to be the coach and that he is ambitious – but for me that is disloyal. I would never do something like that and I don’t want someone with those characteristics in my staff.”

Enrique and Moreno previously worked together at Barcelona, Celta Vigo and Roma. Moreno joined his coaching staff when Enrique was first appointed Spain head coach in July 2018. “I understand his decision but cannot agree with it and told him I didn’t want him as my assistant and that I felt strong,” said Enrique. “Ambition is to be encouraged but excessive ambition is a defect, not a virtue.”Top of Form

Nobody should be afraid of an Igbo man’s presidency in 2023...