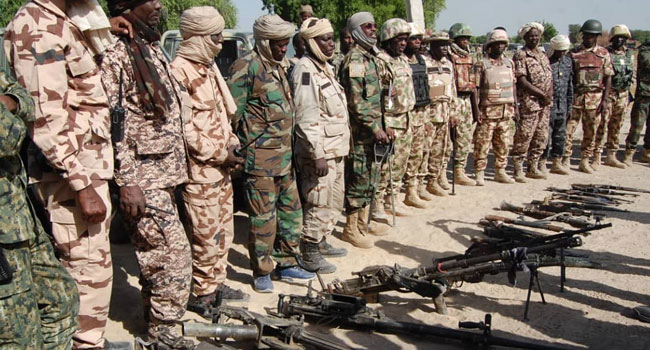 The Multinational Joint Task Force (MNJTF) says it has successfully conducted a multi-sector link up operation involving troops from Nigeria, Chad, and the Niger Republic. A statement by the Force’s Chief of Military Public Information, Colonel Timothy Antigha, said the Boko Haram terrorists suffered severe human and equipment losses during the operation conducted on Friday.

It explained that this was in continuation of Operation Yancin Tafki in Arege, Metele and Duguri as troops of Sector 3 (Nigeria) and Sector 2 (Chad) linked up with their counterparts in Sector 4 (Niger) around the Kamadougou River. “13 terrorists were killed, while many others sustained injuries,” the statement said, adding that three gun trucks were captured while another gun truck and three motorcycles were burnt.

The terrorists, according to MNJTF, also lost three anti- airguns and several rounds of assorted ammunition among other items. However, three security personnel were wounded in action during the operation and have been airlifted by the Nigerian Air Task Force.