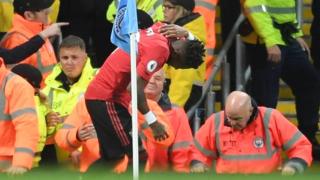 A man has been arrested after objects and racist abuse appeared to be targeted at Manchester United players during Saturday’s derby. Police said they received a report of a fan making alleged racist gestures in the game against Manchester City.

City said they were working with police “regarding an instance of objects being thrown on to the field of play”. A 41-year-old man has been held on suspicion of a racially aggravated public order and remains in custody. On Saturday, a man was filmed apparently making monkey gestures and sounds towards Manchester United players during the derby at City’s Etihad Stadium.

It happened as United midfielder Fred went to take a corner in the second half and appeared to be hit by an object hurled from the crowd. After the match, the 26-year-old Brazilian said: “On the field, I didn’t see anything. I saw it only in the locker room afterwards. The guys showed me. [A man] even threw a lighter and it hit me.”

DG PENCOM says the commission will not succumb to blackmail