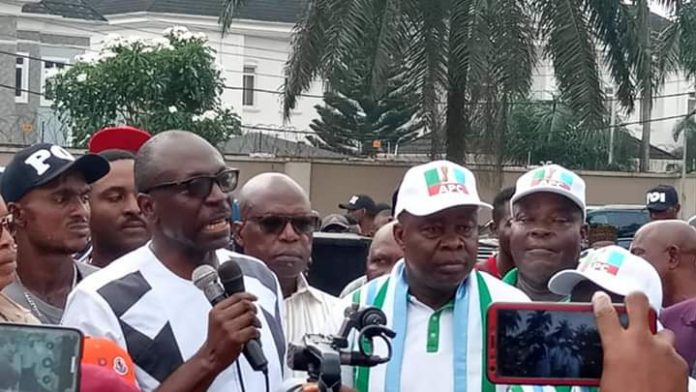 National chairman of the All Progressives Congress (APC), Comrade Adams Oshiomhole, has welcomed former governorship candidate of the Peoples Democratic Party, Mr. Osagie Ize-Iyamu into the ruling party. Mr. Ize-Iyamu who defected to the APC officially in November was received by the former deputy governor of Edo State, Dr. Pius Odubu, who represented Comrade Oshiomhole, at his residence in the state capital.

A large crowd of supporters joined Mr. Ize-Iyamu in defecting to the APC, despite a ban on public rallies by the state government. In the build-up to the rally, suspected thugs lit bonfires on the road leading Ize-Iyamu’s residence in Ugbor, Gra Benin City where the defection took place.

Speaking on the defection, Comrade Oshiomhole said the rally was peaceful and Mr. Ize-Iyamu’s arrival has helped the party gain more supporters and strength in the forthcoming governorship elections. “In spite of everything, APC had a successful rally that was peaceful and it achieved its purpose.