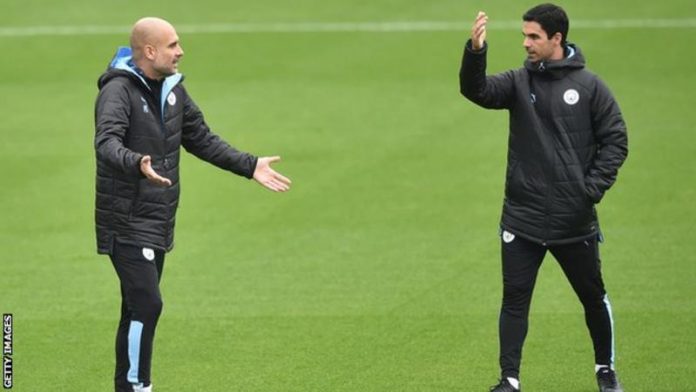 Mikel Arteta will travel with Manchester City for Wednesday’s Carabao Cup quarter-final at Oxford despite holding talks with Arsenal about their managerial vacancy, says Pep Guardiola. Assistant manager Arteta, 37, took part in training on Tuesday after two rounds of discussions with the Gunners.

“He is an incredible person, a good manager, that’s why he has done well with us,” said City boss Guardiola. “He is talking with Arsenal so I don’t know what is going to happen.” Gunners chief executive Vinai Venkatesham was pictured outside former Spain U21 international Arteta’s home after both flew north following City’s 3-0 win at Emirates Stadium on Sunday. It is not yet known whether Arteta has been offered the chance to succeed compatriot Unai Emery, who was sacked in November.

City are reportedly fuming with Arsenal about their pursuit of former Gunners midfielder Arteta and have told the London club it will cost them a seven-figure sum to prise him away. Guardiola added: “Now it happens with Mikel that teams want him. He knows exactly what we would like but at the end the decision is personal.

INEC to start weekly media briefings ahead of 2023 polls