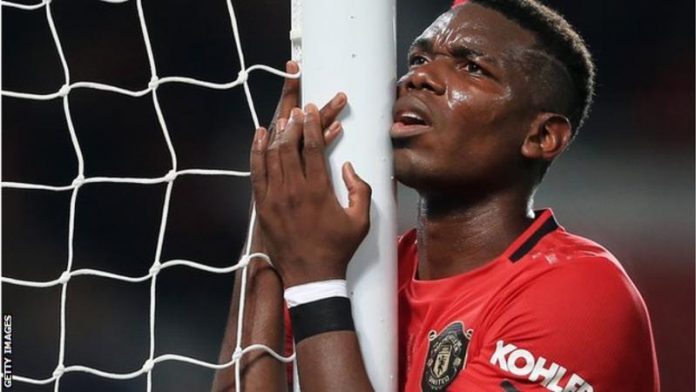 Paul Pogba’s Manchester United comeback is set to be delayed after he missed two days’ training because of illness. The France midfielder was expected to return to training this week after recovering from the ankle injury that has kept him out since September.

Pogba attended his brother’s wedding in France on Friday, but needed a check-up with United’s doctor on Saturday. His symptoms worsened on Sunday. “He’s been struck down ill,” United boss Ole Gunnar Solskjaer said. “He’s been off two days, which is not beneficial. It’s probably set him back quite a bit.” Pogba has played only six times this season, having required surgery to correct his ankle problem.

Solskjaer, whose side have a Carabao Cup quarter-final at home to League Two side Colchester on Wednesday, rejected the idea his side had learned to cope without Pogba. He said they missed him as they drew 1-1 at home to Everton in the Premier League on Sunday. “It’s games like the Everton one, for example, when you are lacking that one creative pass or idea,” said Solskjaer. “He has the quality not many midfielders in the world have, so it would be great to get him back.”

Solskjaer intends to make changes to his starting line-up for Colchester’s first visit to Old Trafford.