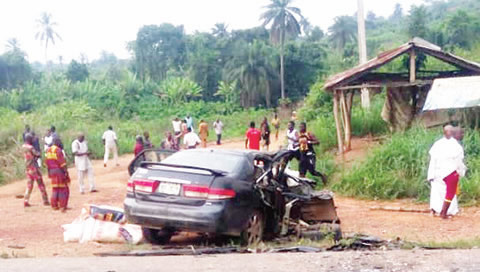 The Ogun State Command of Federal Road Safety Corps on Friday said two persons died while four others sustained injuries in an accident at NASFAT Area, Atan-Idiroko Road. The Ogun Sector Commander of FRSC, Mr Clement Oladele, said this in an interview with News Agency of Nigeria in Ota, Ogun.

Oladele said the accident, which involved a Toyota Camry car and a motorcycle, happened at 12.20 pm on Thursday. He explained that a Toyota Camry car with registration number, SMK 36 CP, lost control due to speeding and rammed into a Bajaj Boxer Motorcycle.

“Seven persons were involved in the accident in which two died while four others sustained various degrees of injuries. “The corpses of the victims have been deposited at the Mortuary, General Hospital, Idiroko, while the survivors are also receiving treatment at the same hospital,” he said.

The FRSC boss advised motorists to be patient, shun speeding and adhere strictly to traffic rules and regulations to avoid unnecessary loss of lives and property.