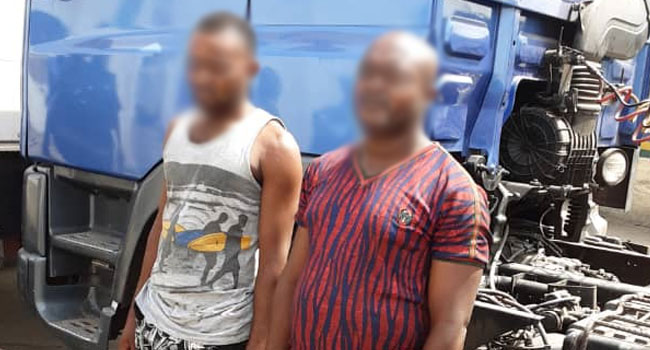 The Lagos State Police Command has arrested two suspected notorious petroleum tanker hijackers in the Mile 2 area of the state. Police Operatives from Itire Division made the arrest after intercepting a tanker loaded with 40,000 litres of petroleum product along Iyana-Itire pin down point.

The suspects are Charles Obllomo (37) and Osita Onyeka (35) while the truck driver, Muhammadu Mande, (42) and the conductor, Lawali Usman, (34) were rescued in the process. The Police Public Relations Officer in Lagos, Bala Elkana, confirmed in a statement on Sunday that the suspects were apprehended while acting on the strength of information from a reliable source.

“In his statement, the truck driver averred that his truck loaded with 40, 000 litres of PMS at Swift Depot, Apapa was billed for Kontagora, Niger State. “That on getting to a bad portion of the road at Mile 2, four men in military uniform stopped him and asked what product he was carrying before ordering him and his conductor out of the truck into a red Toyota Corolla,” the statement said.