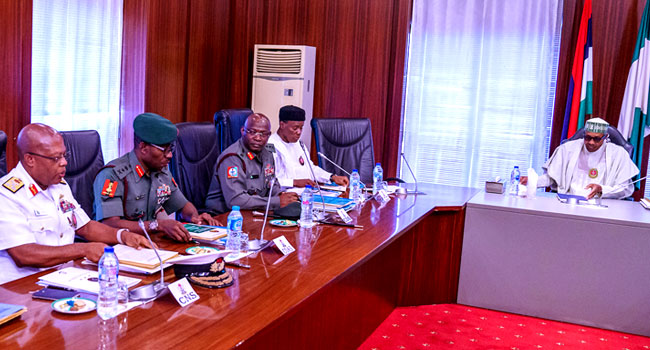 President Muhammadu Buhari on Monday received security briefing from the nation’s Service Chiefs in Abuja. The President met with the top military men in the country at the Presidential Villa in the Federal Capital Territory (FCT). However, the details of the meeting have yet to the ascertained.

The services chiefs were led to the meeting by the Minister of Defence, Major General Bashir Magashi (rtd). Those present include the Chief of Defence Staff, General Abayomi Olonisakin; Chief of Air Staff, Air Marshal Sadique Abubakar; and the Chief of Naval Staff, Ibok Ekwe Ibas. Others are the Inspector General of Police, Mr Mohammed Adamu; and Director General of the Department of State Services (DSS), Mr Yusuf Bichi, among others.

However, the Chief of Army Staff, Lieutenant General Tukur Buratai, was absent but represented by a senior officer of the Nigerian Army. Government officials also present were the Secretary to the Government of the Federation (SGF), Mr Boss Mustapha; and the National Security Adviser (NSA), Babagana Monguno.

Before the meeting started, the service chiefs exchanged pleasantries.

NIGERIAN POLICE TO COLLABORATION WITH THE MILITARY TO FIGHT CRIME