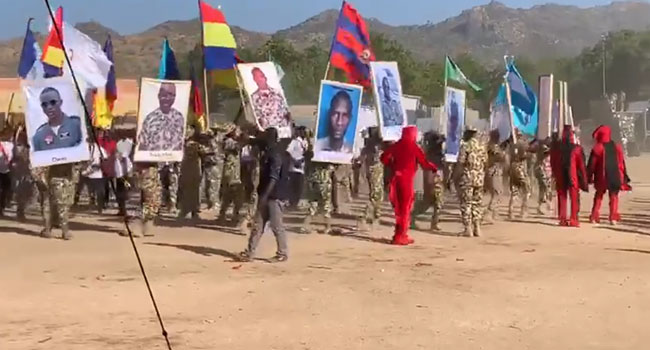 Gallant Troops of Operation Lafiya Dole have held a ceremony to honour their fallen heroes who paid the supreme price to ensure that Nigeria remains an indivisible nation. In a post made via Twitter, the Army stated that the ceremony was part of events at the West African Social Activities(WASA) held at Gwoza Borno State on the 30th of December 2019.

Meanwhile, several Boko Haram Terrorists (BHTs) have been killed and some structures in their camp at Abulam in the Sambisa Forest area of Borno State have been destroyed in airstrikes conducted on the 31st of December 2019, by the Air Task Force (ATF) of Operation LAFIYA DOLE.

The mission according to the airforce spokesperson Air commodore Ibikunle Daramola was executed to mark the commencement of Operation RATTLESNAKE 2, an Air Interdiction Operation aimed at taking out some identified insurgent camps and logistics facilities in order to further unhinge the terrorists’ centre of gravity and diminish their fighting capability.