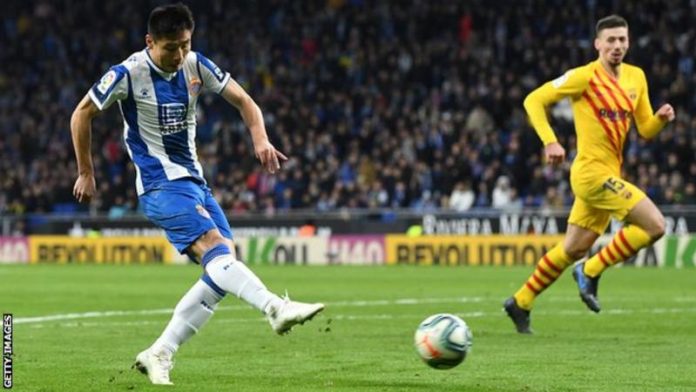 Wu Lei rescued a late point for Espanyol in their derby with La Liga champions Barcelona. The hosts – who are bottom of the table – took a surprise first-half lead through David Lopez’s header.

Barca looked in control thanks to Luis Suarez’s first-time finish and Arturo Vidal’s header – but they had Frenkie de Jong sent off for two bookings. Substitute Wu became the first Chinese player to score against Barca when he slotted home from Matias Vargas’ pass. The point takes Barcelona back to the top of the table above Real Madrid – who beat Getafe 3-0 earlier on Saturday – on goal difference.

Espanyol, who have now failed to win a La Liga derby against Barcelona in their past 21 attempts, were much improved from recent weeks in their first game under Abelardo, who is their third manager of the season.

They deservedly led at the break but Barcelona appeared to be cruising towards victory when Suarez poked home Jordi Alba’s cross and then crossed for Vidal to head home.

Just In: Buhari in closed-door meeting with 36 State Governors

Reps call for immediate evacuation of Nigerians in Ukraine