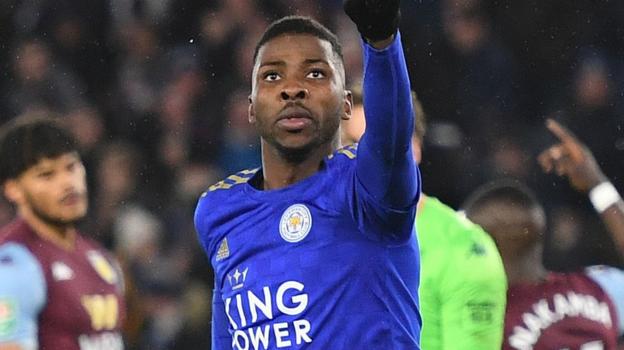 Kelechi Iheanacho’s equaliser gave Leicester City a deserved draw to leave the Carabao Cup semi-final against Aston Villa delicately poised after an entertaining encounter at the King Power Stadium. Substitute Iheanacho finished emphatically from Jamie Vardy’s pass with 16 minutes left to give The Foxes the reward their incessant second-half pressure merited to set up a tense second leg at Villa Park.

Villa, struggling with injuries after goalkeeper Tom Heaton and striker Wesley were ruled out for the season, defended with organisation and resilience to protect the lead given to them after 28 minutes when Frederic Guilbert stole in at the far post to meet Anwar El Ghazi’s cross.

Ezri Konsa’s header also struck the bar for Villa but Leicester applied most of the pressure with keeper Orjan Nyland saving twice from James Maddison and Vardy, who also shot just wide late on, before he was beaten by Iheanacho’s powerful strike from 12 yards.

Just In: Buhari in closed-door meeting with 36 State Governors