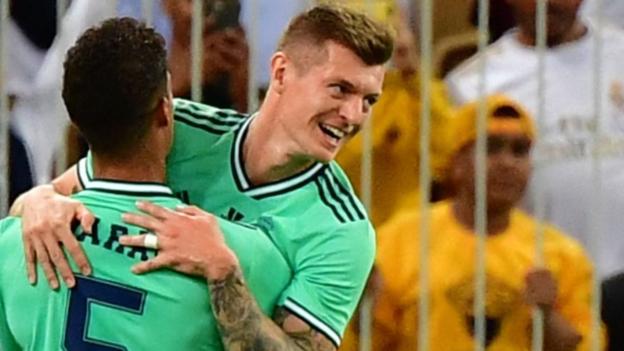 Toni Kroos’ opportunistic goal direct from a corner helped Real Madrid reach the Spanish Super Cup final with a 3-1 victory over Valencia in Saudi Arabia. Kroos’ corner was punched in by Valencia keeper Jaume Domenech as he scrambled back towards his line after remonstrating with his defenders.

Isco’s volleyed finish doubled Real’s lead before Luka Modric made it 3-0. Daniel Parejo scored a late consolation from the penalty spot after the referee consulted the pitchside VAR monitor. The penalty was given for handball by Sergio Ramos despite it appearing to be accidental.

Barcelona will face Atletico Madrid in the other semi-final on Thursday (19:00 GMT), with Real facing the winner in the final on Sunday (18:00 GMT).