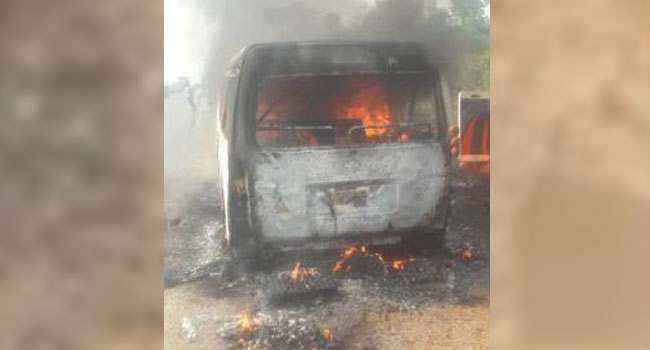 About nine people were killed along the Benin-Ore expressway when a Toyota Hiace bus in motion allegedly burst into flames. Ten passengers were rescued with three of them sustaining varying degrees of injuries.

According to a statement signed by the sector commander of the Ogun State Federal Roads Safety Corps, Clement Oladele, the ill-fated vehicle was coming from the eastern part of the country and was heading to Lagos. The authorities say there were inflammable chemical substances in the vehicle which they suspect could have led to the flame.

The FRSC rescue team on receipt of the information is said to have raced to the crash scene and commenced rescue operations. “While some of the passengers were rescued from the raging inferno, some other passengers as at the time of this report are still trapped in the burning vehicle,” Mr Oladele stated. He added that, “A total of ten people comprising of six male adults and four female adults have been rescued from the inferno with three persons sustaining serious injuries.”

According to FRSC spokesman, the injured victims were rushed to Aro’Ona Hospital in Ijebu Ode. He further revealed that preliminary investigations by the FRSC Crash Investigators suggest that the vehicle while on transit suffered some malfunctions and the driver had to stop intermittently to repair a faulty fuel pump and fuel tank. The investigation went on to reveal that the driver continued to manage the situation until suddenly there was a spark and the bus went up in flames.

It was after the fire was extinguished by the Nigeria Fire Service, that some rescue operatives discovered nine people had died.