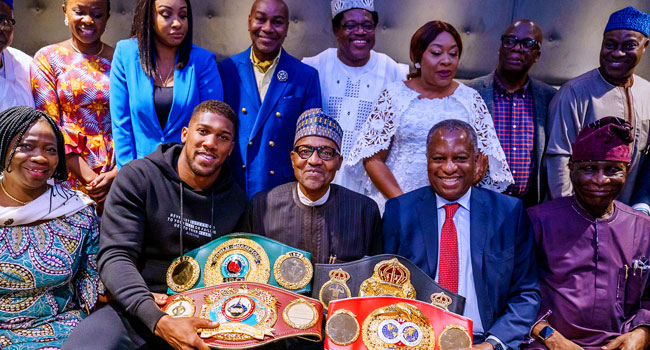 Heavyweight champion Anthony Joshua has presented his IBF, WBA, WBO, and IBO titles to President Muhammadu Buhari. The 30-year-old celebrated his recent victories with the President on Saturday when the Nigerian leader met with some Nigerians living in the United Kingdom.

Excited Joshua could not hide his feelings as he prostrated to pay homage to President Buhari, in line with the tradition of the Yoruba cultural group. He also enjoyed the moments by taking some selfies with the President.

The meeting had in attendance Governor Inuwa Yahaya of Gombe State, as well as the Minister of Foreign Affairs, Geoffrey Onyeama; and his Trade and Investment counterpart, Adeniyi Adebayo.

Others included the Chairman/CEO of the Nigerians in Diaspora Commission, Abike Dabiri-Erewa; and Nigeria’s High Commissioner to the UK, Justice Adesola Oguntade, among other dignitaries.

Joshua met with the President just six weeks after he beat fellow boxer Andy Ruiz to reclaim his IBF, WBA and WBO titles.

Champions League draw: When does it take place? Who has qualified?...