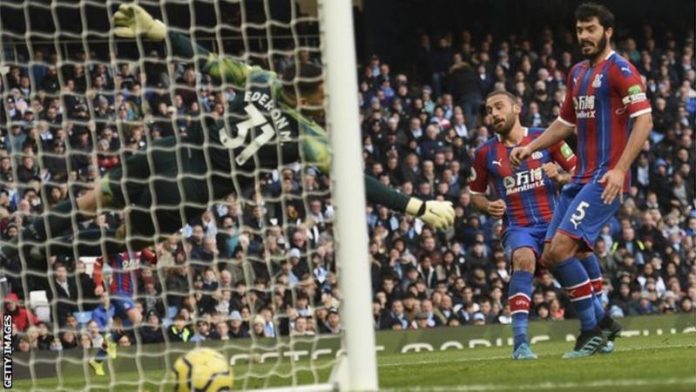 Pep Guardiola said Manchester City’s aim is to “secure a place” in the Champions League next season after their faint title hopes were dealt another blow by a resolute Crystal Palace side. Fernandinho’s 90th-minute own goal ensured the Eagles claimed a draw at Etihad Stadium on Saturday in a remarkable conclusion to the game.

The result leaves champions City 13 points behind Premier League leaders Liverpool, who have two games in hand and play Manchester United on Sunday (16:30 GMT). Two Sergio Aguero goals in the last 10 minutes had turned a thrilling contest on its head – and looked set to earn City victory – after Cenk Tosun had given the Eagles a first-half lead.

Palace had the final word, however, when Wilfried Zaha stole down the left and put in a low cross that Fernandinho reached before Connor Wickham, only to divert the ball into his own net.

Buhari asks Senate to confirm Nami as FIRS boss, 13 others...